A Conversation with D Paul of EMPIIRES 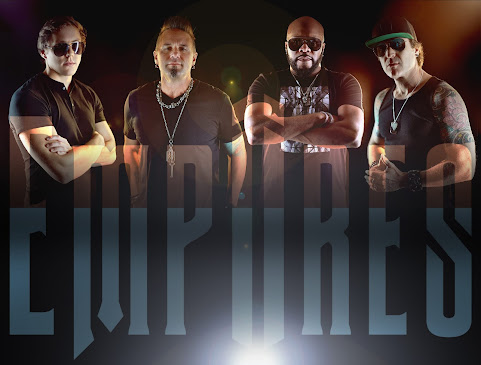 Saul Treno: You have had quite a year with EMPIIRES and getting things going haven't you?

D Paul: Yes, we’ve been busy but we like what we do and we’re having a great time working together. There’s good chemistry within the band so it doesn’t feel like work.

ST: Introduce us to each band member:

ST: Anything during this year that has particularly stood out to you as individuals and life, how about to the music industry and where you all fit in?
D Paul: Watching people work hard to make it through the challenges of everything that’s been going on.  As for the music industry, we’re a pretty mainstream sounding band but with some details that make us unique.

ST: How has the band managed to keep their sanity and passion going for music through everything going on?
D Paul: By working on some aspect of the band on a daily basis. We’re pretty excited about what we’re coming up with so it keeps us going.

ST: Thinking of playing live... Do you have a personal favorite track you like to play live? Is it different sounding from the studio, or do you all keep true to both sides?
D Paul: "Love or Hate" is very cool to play live because of its energy. It’s different than being in the studio but we try to play it like the recording so it lives up to the production people are used to hearing. I think most bands want to give their audience the best version of the song they can perform.

ST: Talk to us about the recent release "Love or Hate". The song seems to be very visual.
D Paul: It tells the story of a relationship going bad. I know we’ve all been there and can identify with that feeling. You can kind of see it all playing out as you listen to the song.

ST: Late in the year releases can be tough, what made you decide now was the time?
D Paul: It’s a new band and we wanted to get our first release out there so there would be some awareness going into the new year when live music gets busy again.

ST: Was there any band discussion before the song being recorded that you went through on how you all wanted to approach and produce your version?
D Paul: Yes, we made lots of demos and gave them to the label and the producer Alex Gerst. It’s kind of like a little system where you go through all the songs and figure out what kind of production might work on each one. The tracks with the best hooks usually become the priorities.


ST: What is EMPIIRE's on track for this New Year? And plans coming with a release?
D Paul: Our first single “Love or atHate“ has just been released on Spotify, YouTube and some other streaming services. It has also been added to the show “Noise Therapy with the Rev“ based in Texas on KSVG 95.5. It’s syndicated to 32 stations in America and few a stations in England and Germany. Everyone at our label (The Label Group) has been great so we’re looking forward to more releases and shows coming up!

ST: Sign us off this year with some of your reflective thoughts over 2020.
D Paul: It was a tough year on many levels but we got through it! Here’s to 2021!