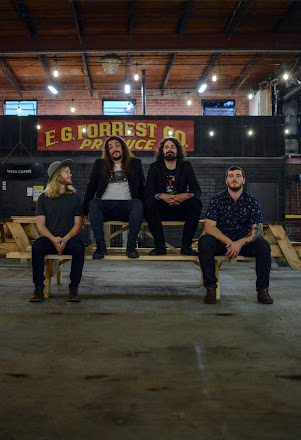 Seth Aldridge: Music is always on my mind whether I’m listening to music at that

moment or not. I’ve met pretty much all my friends through playing music and

about. I like that certain songs or albums can make you think back on a certain

Mason Keck: Music is the biggest part of my life. It's where I met most of my

friends and taken me to most of the places I want to go. Since the pandemic, its

been even more of a refuge to get away from the craziness of Every day life.

Keith Ingalls- Music has shaped every aspect of my life. Aside from my family and

one childhood friend, every meaningful relationship or lasting friendship in my

adult life is directly related to my creating and performing music. For better or

worse it has influenced every decision I’ve made in the last twenty years.

--Where do you each find yourselves listening to music most often?

SA: I think the best place to listen to music is when you are driving or riding in the

car. Other than that I do my more attentive listening in the morning while I’m

MK: I do most of my music listening in thy gym while I'm running. Recently I've

been trying to listen to a new album I haven't heard before every time I go in there.

the last few years. Pre-pandemic I would have also said traveling in the band van

to gigs. During the pandemic I’ve set up my music room at home and enjoy

listening through my studio monitors.

--What are your favorite brands to use when it comes to the instruments,

mics, amps, pedals and so on? Why do you favor them?

SA: I like playing Gretsch and Ludwig drums because they are timeless and always

sound great. Evans drumheads and Promark sticks because they hold up better than

any other brand and I always know what I’m getting with them. I like any good

cymbal I can get my hands on. Lately, that has been Istanbul or Zildjian cymbals.

MK: When it comes to guitars, I'm a big Gibson guy. I also love Fender guitars,

but I usually play the Gibson role in the band. I also play Germino amps, which

are the best Marshall-voiced amps on the market in my opinion. I love old Fender

amps too! BMF and Cusack effects are my go-to pedals. The BMF Purple Nurple

is like The Black Crowes in a pedal! As far as mics, we're typically using

Keith Ingalls- I really enjoy my Fender Precision bass, Super Bassman amplifier, and cabinet. I have a reissue of Guild Starfire II that I love in equal parts because of

its unique sound and it was my teenage dream bass. The Barefoot Effects Pale

Green Compressor is great, it’s very quiet and even sounding. I’ve had the Xotic

use them to add varying amounts of overdrive and boost. I keep an MXR Phase 90

reaction from band members. We currently use Sennheiser e935 vocal

microphones for live performances and rehearsals.

--Talk about your current project. Its conception. How it evolved. The

during the writing/recording process?

SA: Our newest recording came about because we had written some new songs

them together. With some luck and good timing around the time we decided to do

his studio. Everything just fell into place and working with Jay was a lot of fun and

I think the product is the best thing we have done to date.

MK: Our current project has been years in the making! Some of the songs were

written recently, and some were written throughout the years and never released.

and we weren't pleased with the end result, and this pandemic gave us time to

really sit down and dig in. It was also cool to look at the older tunes with fresh eyes

and make some changes that made the songs better as a whole.

other three guys in that they are all new songs for me. “Big City Blues”, “Glass

songs the band had written and possibly recorded but never released before I joined the band three years ago. However, we hadn’t performed them since my

2020. “Burger King” is the newest song of the project. We have been performing

--Were there any conflicts during the recording process? If so, how did you as

a band overcome them, if not what do you think is Jive Mother Mary’s

formula to gel so well?

SA: This recording process went really smoothly and was a lot of fun. I think Jay

really knew how to capture what Jive Mother Mary does. If anything I just wish

we would have had more songs ready and more time.

MK: There really weren't any conflicts during the recording process. We spent

plenty of time preparing for the studio, and I felt we all knew the songs well. It

each other most of our lives.

Keith Ingalls- Aside from the uncertainty of the world as a whole, I thought the

process went pretty smoothly. Beyond being great players there’s a lot of history

with Mason, Seth, and Schulz. They’ve been friends, bandmates, and (at times)

roommates for well over a decade. They’ve shared so many musical and non-musical experiences together. There’s a certain group intuition that comes with all

of that. Being the “new guy” I just try to listen and play the best I can to keep up

SA: Something that I did with this project that I’ve never really done before was

get to spend time and experiment with different drum sounds. Usually, we are in

and out in one day and basically set up play everything down, and move on. This

time we would see which drums and cymbals sounded right for each track. We

would swap drums and cymbals out, change heads, remove heads, Change mics, or

mic placement. We got some really great sounds.

MK: My favorite part of the experience is when you have just recorded an

awesome take of a song, and you listen back over the studio monitors. If the track

sounds great raw and unmixed, you know it&#39;s going to be an awesome final

product. I also love going back and layering guitars after the rhythm track is

finished. It's like putting the sprinkles on the Ice Cream.

Keith Ingalls- I like being there for all tracking sessions even if I’m not needed. If I

feel like I’m in the way I’ll go have coffee or three in the break room.

SA: You can never be sure a song is one hundred percent done until you lay it

down and that’s it. Once it goes down on record that’s when you are stuck with it.

MK:...I'm the worst! Admittedly, I'll go on and on with a song until someone else

says, "Dude, it's finished!" There usually is a point tho when it's clear the song is

ready for the next process.

where do you see yourself (yourselves) as an artist/band in 2021 and beyond?

SA: Honestly for 2021 I’m just hoping to get back on the road. I hope we can make

up for some of our canceled dates and tours. Hopefully, get back to Europe. I think

MK: 2020 was the strangest year you could imagine for artists. We are very much

a boots on the ground type band, and it has been tough not touring and playing

live! I'm hoping 2021 brings back a safe touring schedules, and I hope our new

Keith Ingalls- Hopefully we can return to performing live later this year.