Getting to know more about Gabriel and the Apocalypse Latest EP of Remixes: 'Alpha Transcendence' 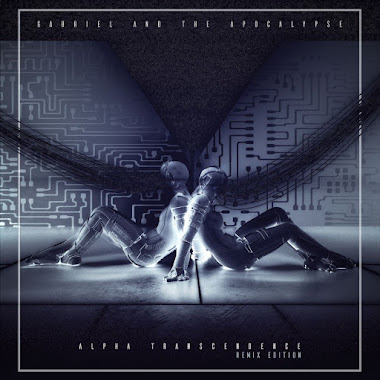 We want you to tell us about each of the songs from the EP.  The title, who wrote it, why? Describe it to us. Why did you choose whom your chose to remix?
Lindy Gabriel- We reached out to some friends and they each decided which song from our album 'Alpha Bionic' that they wanted to remix.  The remixes were done by the following:

How does the EP tie in together, or does it? Does each track stand alone?
Lindy Gabriel- They stand on their own since every song was remixed by all different artists.  Each song is it's own piece.  Even the lyrics were re-arranged in some cases so they have a different vibe in that way.
EP titles like book titles are interesting - story behind 'Alpha Transcendence' name.
Lindy Gabriel- We wanted the remixes to connect with the originals. 'Alpha Bionic' into the 2nd phase or next chapter begin 'Alpha Transcendence'.
What are some of the bands favorite albums, each member give us two each and why they are.
Nirvana 'nevermind'. That album inspired me as a kid and left an imprint on my heart. The passion, rawness and lyrics captivated me. Marilyn Manson's 'Antichrist Superstar' is another album that left an impression on me. The record has a concept, and a mood. The lyrics and artwork all flow together with perfect cohesion.  -LindyGabriel
I am always kinda shifting around what my favorites are in rotation but I guess I would have to say 'Playing the Angel' by Depeche Mode.  I love the layers of syths, and sounds, and of course their ability to produce catchy melodies is apparent on each of their recordings.  Stone Temple Pilots 'Tiny Music (Songs from the Vatican Gift Shop)' is one of my favorite albums.  Just great musicianship, song writing, and creativity.  - Jake LaCore - Guitar/Bass

The Prodigy’s album 'The Fat of the Land' is by far one of my favorite albums as well as one of the bands.  The diversity of this album is one of the best things about the disc.  The amazing capabilities of the keyboard player inspires the band to try harder as well as to stay diversified.  Plus if you're ever trying to lighten the mood up, or acquire another speeding ticket "Smack My Bitch Up' is probably the song you're looking for.  - Figgles McGee - Keys/Samples

'Wisconsin Death Trip' by Static X is definitely one of my favorite albums ever.  The industrial drums and programmed loops mixed with Wayne’s crunchy riffs and killer vocals make this one of the best metal albums of all time.  Everyone in the band enjoys turning this one up to 11.  Another one of my favorite albums would have to be 'Iowa' by Slipknot.  I don’t think there’s a heavier album and the drumming on the sophomore album is incredible.  - Zach Willams - Drums

'Jar of Flies' by Alice in Chains is a perfect album.  It gets in, tosses all your weird emotions in a blender, and then makes you a delicious margarita.  It’s short, sweet, and touches you all the right places. There is a lot of specialness there.  It’s really hard to narrow to two albums.  Mudvayne’s 'LD50' is also still in my car’s CD play right now.  I love the sound of music like that.  It’s all texture.  I had always thought I wanted to be a fancy solo player, but after absorbing that I really think rhythm is where it’s at.  It’s chunky.  - Joey Connelly - Guitar