Interview with James Tangman of Pardon the Scars 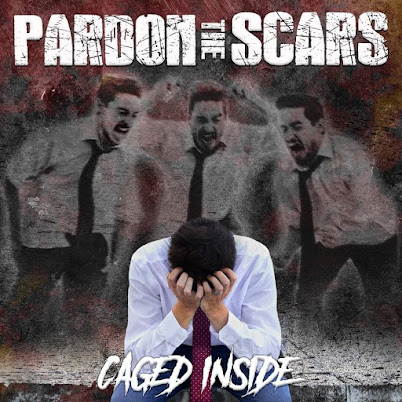 Saul Treno: How has 2021 kicked off for you? Is the music path looking clearer?
James Tangman: 2021 has been a great year for us starting out. We took the majority of 2020 off due to health/family concerns amidst the pandemic...ad has started back in the studio this year. Our path isn't clearer because I think there are so many variables in the industry right now, but our direction certainly has become more clear.
ST: Introduce us to each band member:
JT: James Tangman on vocals and guitar, Steven Godbey on bass, Brian Bauman on lead guitar and backup vocals, and Bryan Norris on drums.
ST: What are some of the goals you have set forth for you and your music this year?
JT: We plan on making 2021 the year of creating. From writing and recording new music and creating a wider fan base through various channels. With shows and venues virtually nonexistent, we are less focused on that part and more able to take out time and make the most of this extended "down" time instead of sacrificing show schedules to do so.
ST: Last year was tough without shows and touring how has the band managed to keep their sanity and passion going for music through everything going on?
JT: I think we all sort of gravitated back to our personal lives and life outside of music for a bit...and while it was certainly frustrating at times, it helped us return with a newfound respect and drive for what we do. We lost the outlet of performing, and that was a tough blow to absorb. Coupled with health concerns in my family we had to set aside rehearsals and recording sessions for a while, which was even harder. But once we got back together and started playing it was like we hadn't missed a day. We stayed in contact with song ideas and going over what we wanted to record next, what videographers we wanted to work with, stuff like that. The back-end work.

ST: Thinking of playing live... Do you have a personal favorite track you like to play live? Is it different sounding from the studio, or do you all keep true to both sides?
JT: Well, Caged is certainly a favorite, as well as the next single we have on deck for release. Our live sound is a little rawer than a studio setting, but we try to capture that energy when we record so that there isn't much disconnect. Instead of trying to play it like the recording, I think we try to record it like we play it live. Also, songs evolve naturally in this band so if a part gets restructured or a cool guitar harmony comes out of a rehearsal and its really good, we keep it. So in that way, we don't necessarily keep to the recorded versions just because that's the way the song is "supposed" to go.
ST: Talk to us about the recent release "Caged Inside".
JT: Caged Inside is a song about the dark parts of your personality bubbling to the surface when you are really just trying to maintain normalcy. Whatever that is. When you're on the verge of a breakdown you can feel it coming, and this is kind of a glimpse at the internal dialogue happening in those moments. You're tearing yourself apart trying to keep yourself together.
ST: The song seems to be very visual. The lyric video fits.
JT: Thanks so much! We were quite pleased with the way it turned out.
ST: How did you all go about recording during this time and what about creating the video?
JT: We had actually recorded the song right before the massive outbreak and restrictions were set in place. It was actually out in mix/master once the sky started falling. We rehearse and record everything at my home and send our stems off for production, mix/master. We originally planned to film a music video but due to harsh guidelines at the time we weren't really able to pull it off. The lyric video was a backup plan, but we are all happy to have taken that route. It turned out pretty sick!
ST: How do you and the band approach writing and recording? Is it a joint effort or a one-person job?
JT: I tend to write all of the lyrics, but I also try to get everyone's input on them as far as content, message, stuff like that. We lay them out and discuss things like if this or that line doesn't really fit or make sense. The music is all written together as a band, even songs that are fully written when they're brought to the table by one member. Our goal is to write the best songs WE possibly can, so no ideas or parts are too sacred to be dissected and made more cohesive.
ST: Which bands would you say are relative in sound to Pardon the Scars?
JT: That's a tough one because we have so many influences that you can hear kind of blended together. I don't think we have heard that we sound like this or that band, but...gun to my head, I'd say we have elements of Chevelle, 10 Years, Alter Bridge, Machine Head, A Perfect Circle, Nothing More, Foo Fighters and even bands like Maylene and the Sons of Disaster, Fair To Midland and In Flames. It's more like a list of influences because I'm not sure we would sound anything like those bands side by side, but we are inspired to create by all the elements we love about their music.
ST: Can you tell us what Pardon the Scars has planned?
JT: Right now we are recording as much as we possibly can to get a nice little nest egg of songs to release either as singles, perhaps an EP. Right now I think the singles route is the more attractive one just because there's not much in the area of live music so a more steady flow of content may be a better approach than a one-time drop of several songs.