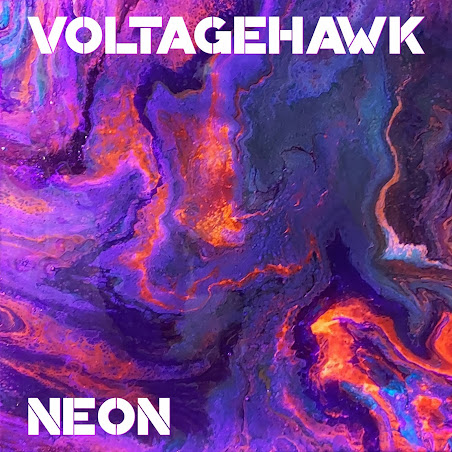 Randy Stillwater: Who are Voltagehawk and what does your band bring to the table when it comes to sound and meaning?

Voltagehawk exists as a collective of artists, traversing space and time while seeking to know thyself thru an authentic connection to the cosmos, using the preferred communication of music and art to express the emotion of togetherness.

With a heavy ethos rooted in the idea that the word ‘no’ is not welcome in the creative space, our process opens an arena for all genres and vibes to be equally invited to the party to ultimately “do what is right for the song”. Generally, the concept is, if we think it sounds and feels awesome, hopefully, you will as well. Many genres make it to one cohesive song. As far as ‘meaning’ to each song, each track is a nesting doll. The song is immediately about the human experience and condition, as most songs are. Then the rabbit hole begins. Our songs are a soundtrack to a film that is yet to be made, all fitting into our visual world of Electric Thunder: a heroine's journey through space and time as she realizes she is the only translator for the most important message Earth has ever received.

Randy Stillwater: What inspires you about the music scene you have in the area?

The sheer diversity of Nashville should inspire! A town full of gigantic artists across all genres. There are members of iconic Metal and Classic Rock bands here, obviously Country and Bluegrass, and massive Hardcore and Punk bands. Icons live here.

Randy Stillwater: What is something Voltagehawk has done to help the band scene that has improved or brought attention to your local music community?

Voltagehawk is built on an old head mentality of the local ‘scene’. Stand down front for the opener, stay for every band, no green room bullshit. A high tide raises all ships. DIY everything. I think setting the tone for how bands should coexist and actually create a scene is a lost art form. I’d have to say our spirit of collaboration has brought attention to what we are doing. We put a lot of people from ‘the scene’ on our records, across genres, across cliques. In the spirit of doing what is right for the song, we work with artists that we love on original cover art, vocal features, weird instrumentation of the records. We treat making records as a giant artistic jungle gym and then invite our friends over to play.

Randy Stillwater: What are some ideas you might have to help the local scene there?

Probably to help people learn to build really cool shelves for all of their Grammys!
I’m joking, but only kind of. Nashville is incredible, not much help needed to keep being “Music City”. This place continues to inspire. The hustle is real.

Randy Stillwater: Your new single "NEON" is intriguing. What do you hope people walk away with after hearing it?

Well, we recently had a fan and friend nail it:

This songs roars.
This song desires danger.
This song yearns to be unleashed.
This song scoffs at “11”.
This song begs to be taken out at 2am and driven fast on a deserted parkway.
This song knows it is to be played loud but is confident it’s worth ruining a hi-fi over.
This song orders drinks well after the last call and the staff obliges because this song has seen some shit.
This, my friends, is a rock and roll record.
Do you remember those?

Randy Stillwater: Who all came together to work on this single and is it the same team you are using as you build this project?

The main team is always the same: Geoff Piller recorded and produced the track, it was Mastered by Brian Lucey at Magic Garden Mastering in LA. We are working with Denny Sanders on label distro with this one at The Label Group out via Ingrooves. And very happy to be working with our longtime Jedi council member Rob Gross at Shark Attack Records.


Randy Stillwater: Will there be an eventual  EP or an album that will relate to the sounds and storyline? Do we have a release date yet?

There will be a full 13 song album that is the soundtrack to the greatest space epic yet to be told! We have a release date, but can’t say just yet. Preorders will come with the next single on 7/23!

As far as the storyline:

Voltagehawk has heard the call!

An ominous tone emanates from the depths of space
and time near the distant star system Camelopardus.

A message of hope. A revolution. A weapon.

As the Cosmic Hangman continues to tighten his grip
on the Universe, The Beings cry out for liberation.

His evil Engineer, on a mission to subjugate all in his path, has created a rift in the Galactic Brotherhood.

Now, all are in danger of The Alabaster Sun.

The Heroine Navaja has commissioned a Rebel crew to navigate the perilous journey to locate the Truth Sound.

As the Starship races towards the Land of No-one,
they must succeed in decoding the message within and deliver Electric Thunder to Earth before it’s too late…

Randy Stillwater: Who have been some of the bands' biggest influences musically?

The list is very long, and varies broadly depending on the member you ask. We really do like everything from Kamasi Washington to Animals As Leaders, Whitney Houston to Mastodon, Ennio Morricone all the way to Iron Maiden, Ravel down to Def Leppard. Everything we have ever heard has influenced these records.


Randy Stillwater: Would Voltagehawk ever consider doing a cover song? If so, any particular song?

In the spirit of the last question, we covered Mariah Carey’s greatest gift to the galaxy “All I Want For Christmas Is You”. The video is a nod to Troma films.


Randy Stillwater: As the world becomes “normal” again what are a few things you a ready to get back into?

We are already back to playing shows and touring! Come hang!


Randy Stillwater: Have you guys talked about shows/tours and if so any dates or special events you want to share with the readers?

We are planning a very special release party in Nashville, and will keep everyone posted!

Randy Stillwater: Thinking about this project as a whole... there does seem to be a story connecting. Has Voltagehawk considered possible ways of putting this together as a visual presentation? Reason, there was a time that the bands Pink Floyd and even Led Zepplin had taken albums and created visual presentations "films" to their projects.

We are currently working on releasing the first comic book issue along with the full album release. The first episode of 'Electric Thunder’ will be told as a 6 issue series. There will also be a retro video game experience launched with the focus track Cosmic Hangman featuring Landon Milbourn of Goodbye June.

The story is being revealed as each song is released, check out our Instagram for teasers!


Randy Stillwater: Where can we find out more about Voltagehawk and the best place to follow you would be?