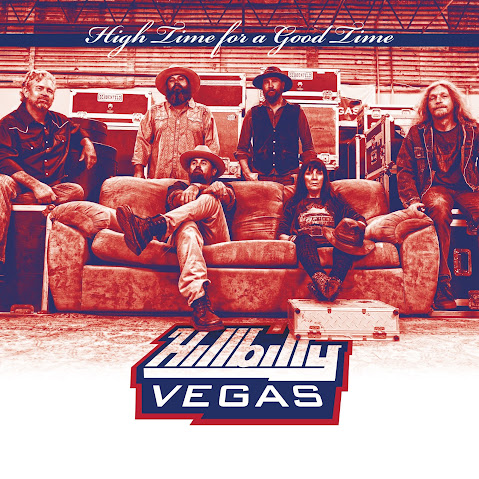 Celeste Maulist: "High Time for a Good Time" is a great track whether it's under a country vibe or a rock bite. Do you favor the song either way in sound?

CM: Each time Hillbilly Vegas releases a song you sense there is a collective coming together. Just watching the video "High Time for a Good Time" the audience is even feeling the community of Hillbilly Vegas. At times bands come across as being completely separate from each other- almost like they are just making music but with no depth of connection. How do you all create that warmth together?

Steve Harris-Well we aren’t hired, musicians. We are guys who have known each other forever. We are friends in most cases since school age. So there is a different vibe. You can’t fake that stuff. Just like the guys in Skynyrd or The Kentucky Headhunters we came together as childhood friends first and guys in a band second.

CM: We are in a golden age some might call it, or the age of adjustment. What is your take on where we are right now in the music industry?

Steve Harris-A smarter guy than me once said “the golden age was never today” I think I agree. To some young musicians out there today will indeed be his or her golden age when their time has passed. To me, this is definitely not the golden age, it’s just Friday.

CM: Do you see it being more of a hindrance or more of a learning experience?

Steve Harris-Every era has its hindrances and learning experiences. I’m not trying to be Yoda here but it’s true.  We just play the game that’s in front of us each day.

CM: What are your feelings about music streaming?

Steve Harris-As a fan I love having every song ever at my fingertips at all times. As an artist/writer I wish it paid better.

CM: How important is it nowadays to have everything set up as it should be before releasing music? Is it all becoming too complicated for musicians to be heard?

Steve Harris-I love technology, I just wish it was used as an additional tool and not the ONLY tool these days. Here are my 2 cents on what is important before releasing music. Develop patience and learn how to work...that’s the answer.  Work hard on your craft! Get out and play in front of people. Build something real and create a loyal following who can invest in you and grow with you as you expand your footprint. There are no workarounds or shortcuts if you want it to last.

CM: The use of the hashtag has been widespread and sold as crucial in being found on the web. How important have you found it to be and have you learned how to do it correctly?

Steve Harris-We use them, the people we work with on the socials side use them, but no one has ever approached me after a show and said WOW...what a great hashtag!

CM: Paying to get on playlists, paying to get put on a tour. Do you see it as being necessary now more than ever?

Steve Harris-One thing that has always been the same is money. Once you’ve done the work I talked about earlier, it takes money. There has never been a time in this business that an artist didn’t have to grease the right palms to reach the next step. So my answer is no it’s not more important now more than ever. It just continues to be as important as ever.

CM: Many musicians hold down day jobs. Some diversify and offer other products, like coffee or beer. There are those musicians though that have taken on some interesting side careers.  One example of a career switcher was when Dee Snider (Twisted Sister) did voice-over work for SpongeBob SquarePants. What other outside developments do you currently have happening and what other endeavors might you want to look at?

Steve Harris-We absolutely do have outside financial interests and businesses. I think in truth that’s the reality of today’s music business. You must have other financial options to succeed.  If you want to be patient and let your career as a musician grow and eventually thrive, you better have another way to eat. In today’s world, the starving musician being discovered and suddenly becoming an overnight sensation is a fairytale.  I’d say to anyone who believes in that fairytale, there’s a high probability of starvation and failure.

CM: If live concerts are once again on hold, the advent of Twitch TV has been utilized, what about the idea of holographic concerts? Any thoughts on how you think that might go over in the industry? Would you be willing to try different ways to bring a "live" overall experience to your listeners? How would you continue to help keep the vibe of 'togetherness' and 'good times' do you think?

Steve Harris-We had a nice offer to do live shows on Twitch last year. We had a crew come in and film us doing our set and we hated it. So I don’t know the answer to that question from my point of view. We need people to do what we do. If there are no people, there’s no Hillbilly Vegas.  As for Holographic concerts...yikes!  Having said all of that, yes we are open to getting our music out any way possible. Who knows, we may try it again and maybe it works the next time.

CM: What are your thoughts on selling song catalogs? Red Hot Chili Peppers are selling their entire song catalog for $140 Million.  Many other musicians have sold theirs. Publishing is far more lucrative than the mechanical royalties paid to artists based on sales, airplay, and streams. Would you be willing to sell your back catalog if someone like Universal was willing to buy everything, such as all the rights to all your songs? If so, why. If not, why not?

Steve Harris-YES! I doubt that anyone is out there trying to put a budget together for our catalog at this moment but I’ll say it here first...it’s all for sale. Come get it!

CM: What is Hillbilly Vegas looking to do moving forward as we keep changing how the music industry works?