Interview with Trip Sixx of the Band GEARS 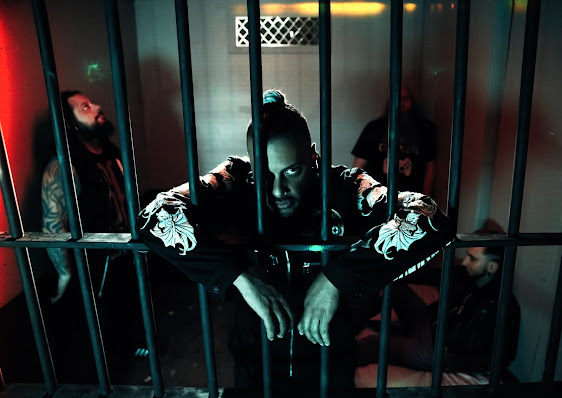 Interview with Trip - Lead singer of GEARS by Carox Rox

Carox: Tell a little bit about your band history – I think you have been together for a while.

Trip: We have been together for 15- 16 years. Jimmy Wooten and I are the original members of the band. It has been an uphill battle, to say the least but with success. We have had some downfalls and battles!

Carox: So, the band members you have now have been together since before Covid?

and a half now.

Carox: So, a nice solid lineup, and there you are playing out band about before the pandemic

suddenly strikes. How did that affect your band?

Trip: We started writing and started to do a lot more than we could do at the time we were touring.

We started writing songs and it has actually been quite a blessing for us to be quite honest with you.

Carox: I can see you have been pretty creative since the Pandemic which is why I was interested in

this interview. You guys didn’t fall apart. You guys went ahead and ended up with the "Wasteland".

How did that come about?

Trip: Yes, Wasteland is doing super well. So short story we had a meeting interview with our

business manager and we wanted to keep being creative during the pandemic. So, we said let’s start working with Chris Dawson and Jimmy Beattie, we called up and set up a schedule and flew down a few months later after that to Wichita, Kansas and we stayed at this little horse farm. We rented the littlest trailer in the middle of a horse farm and we were out there for a week. In the early morning, we would wake up with donkeys and horses and go to the local diner who already knew us after the third day and then go to the studio for fourteen hours and then go back and do it the next day. It was so seamless. Chris Dawson and Jimmy Beattie are amazing producers…we spent time grinding it and hitting different melodies. But it was a beautiful grind. It was something that we had missed. It was like that saying “you don’t know what you have got until it is gone”. We missed our touring. I think that is why Wasteland came up so good and the way it is. And right now, it is doing super well.

Carox: I know that you have other music and videos. Do you tend to release a single one at a time?

Trip: The big plan for us is to release singles at this time because it is a singles market, but now "Wasteland" has taken off the way it has and we are charting on Billboards and doing quite well. If this continues, we will bring out an album including Wasteland. We got two more singles in the pipeline right now …we need to get another eight maybe. I would love to do a full album.T

Carox: I think your fans would love that too. I love the approach because we can appreciate each

single as they come out. You all look amazing in the video – how did you do that?

Trip: We owe that to JT Ibanez. He is an amazing videographer. We were with him for about 12

hours. We flew to St Louis and we went ahead and knocked it out. He makes you feel comfortable

and time literally just flew. We had a great time doing it.

Carox: It is pretty flawless, like a movie. Are you guys going to be coming on tour soon?

Trip: We are planning to. It is up in the air with the whole Covid thing and a couple of our members are not vaccinated yet. It has to be something that makes sense. Like if Wasteland hits the charts and is in the top ten, we will have to get out there. As of right now nothing yet.

Trip: Well, the best thing I can say to our fans is thank you. …I thank those almost ten thousand fans on Facebook, and those ten thousand fans on Facebook, I am sure I have taken a photo or shook the hands with two-thirds of them. We appreciate our fans to the fullest We don’t hide on our tour bus after shows…we go out and meet them - they pay our bills. We do what we want to do and what we love because they give us the energy to do so. It is a win-win situation so why not give back the fans. They are the ones that put us on the map.

Carox: You have a very strong message in Wasteland. What can you say to anyone who has been

suffering during the pandemic?

Trip: Just hold on, if not for you or your family, Stay strong. Look forward. It is just temporary. Pain is temporary. You can make the best out of it if you just ask a friend and don’t be shy of asking a friend for help. There are people willing to do so. We have done it with some of our fans and I always try and answer them back. There are fans who have hit us up and said thank you, you saved my life. Thank you for the message you put in several of our songs. If you lost your job, something else will come. Bigger doors will open, I know the country is going through a major change and to be quite honestly - only the strong will survive, no – only united will survive. Take care of each other and love each other.

Carox: Thank you for this interview! Look forward to seeing you guys live!